Two UK airports have become the first in the world to introduce holographic announcers.

Passengers at Manchester and London Luton airports will both be greeted by holographic staff from this week in a bid to reduce security bag check queues.

Recordings of actual employees John Walsh and Julie Capper have been appearing to travellers entering the security search area at Manchester’s Terminal 1 since Friday. The pair explain the liquid restrictions and remind passengers to have their boarding cards ready.

Dubbed “John” and “Julie”, the images were created by the same company which brought the chart-topping animated band Gorillaz to life on stage.

The new technology, developed with Musion, was launched as a world first by the airport’s bosses last week, only for Luton to unveil their own holographic announcers just days later.

“Holly” and “Graham” were introduced on Tuesday and were custom designed for Luton by Tensator, a British company that specialises in queue management and digital signage. 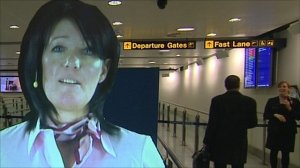