Geoengineering: Controlling the Weather Before It Starts 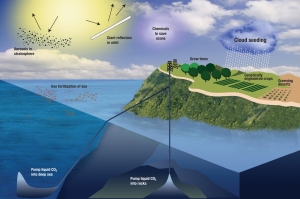 The Chinese and Russian governments have decided, with considerable chutzpah, to fall victim to harsh, snowy winters no longer. They’re not just figuring out new ways of removing the snow once it falls–they want to control the precipitation before it starts. In Beijing and Moscow, that means turning to cloud seeding, a technique in which planes spray clouds with various substances (silver iodide in China, a mix of cement powder, dry ice, and silver iodide in Russia) to cause water vapor to crystallize at different temperatures than it normally would.

The effectiveness of cloud seeding is slightly dubious–some experts cite a change in precipitation of only 20% at most–but it’s promising enough that the Chinese and Russian governments would attempt to use it in completely opposite ways. In Russia, the government seeks to limit precipitation: former Mayor Yury Luzhkov attempted to spray clouds in order to eliminate snow within his city’s limits. But in Beijing, a city suffering from a decade-long drought, cloud seeding was intended to spur precipitation, rather than prevent it–though Beijing residents don’t seem to thrilled at the prospect of crazy amounts of artificially induced snow.