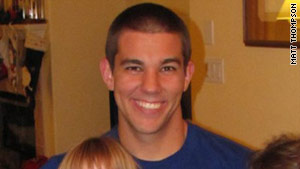 The body was found after officials drained a portion of the Manzanares River near the discotheque where Bice was last seen after a night out with friends more than a week ago, said Jesus Sanchez, a spokesman for the central government’s main regional office in Madrid.

There will be an autopsy but an initial visual inspection of the body did not indicate any signs of violence, the officials said.

The San Diego State University student had not been seen by friends since early February 26, when he told them he was going home, alone, while others stayed at a discotheque, family members and friends said.

“We are all very upset,” said Carlos Lopez Terradas, head of international relations at Madrid’s University of Carlos III, where Bice had come last January for a semester of business-course study abroad.

A team of California-based investigators was due to arrive in Madrid on Tuesday to help search for him.

Austin Taylor Bice’s family hired the investigators from The Halo Corporation to help with the search, his father said Monday.

The Halo Corporation’s website says it is a San Diego-based company “founded by former special operations and intelligence personnel.”

Bice’s father Larry, an accountant, rushed to Madrid from San Diego last Wednesday and has since met several times with Spanish and U.S. authorities.

Friends of the student quickly organized a campaign to put up posters of him around Madrid, which read “Missing. Austin Taylor Bice. U.S. citizen, 22, 1.95 meters tall and 100 kilograms” (6 feet, 5 inches and 220 pounds).

There had been no indication of a kidnapping, and no demands were been received, his father said before the body was found.

The river has a series of dams to control the water flow and police have been inspecting various sections of it for several days. On Monday evening, they began draining the section where Bice’s body was found on Tuesday morning, a spokeswoman for the National Police regional office in Madrid, told CNN.

Austin Bice arrived in mid-January for a semester of business-course study at a Madrid university.

On Friday, February 25, he went out with five friends to a popular Madrid discotheque that doesn’t open until midnight. He later left alone, early February 26, saying he was headed home, friends and family members have told CNN.

Over the weekend, a family member said that contrary to earlier reports, Bice was not refused entry to the discotheque by doormen and was not drunk, although “he had a few beers.” Instead, he just decided to go home.

“We always told him, never be by yourself. Always be with somebody. And I think the problem was he got a little bit overconfident and decided that he wanted to go it alone, go back to the house by himself and that was the problem,” said the family member, Juan Gabriel Paredes, who came to Madrid from Wichita, Kansas, to help Bice’s father in the search.

Paredes said four of Bice’s friends went into the discotheque while Bice and another friend remained outside. Eventually Bice decided to go home alone.

Dozens of friends of Bice and others responding to internet notifications conducted a search last Saturday starting from the discotheque, La Riviera, on the banks of the Manzanares River, down a hill and removed by many blocks from the city center.

“I just want to say thank you for all being here. It’s hard for me to talk about it, but thank you,” Bice’s father told the search teams before the body was found, his voice cracking.

“People we’ve talked to say if it were bad, it would have shown up right away,” Bice’s father told CNN last Thursday. “It’s easier being here than at home. I see what’s going on.”

The student was carrying two credit cards and his California driver’s license, his father said.

Calls to two cell phones Bice was carrying the night he went missing have gone unanswered, his friends say.

The U.S.-based Institute of International Education said that in 2007, Spain was the third most popular destination worldwide for Americans studying abroad, after the United Kingdom and Italy. It said there were about 17,000 American students in Spain.

The University of Carlos III, where Bice was studying, has 18,000 students, of whom 1,500 are from abroad, including about 220 Americans, Lopez Terradas said.