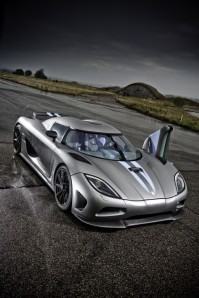 Christian von Koenigsegg has once again created a hypercar of the highest order – the new Agera R features so much innovation that we’re not going to even attempt to squeeze it all into the introductory paragraph. The 5 liter, V8 bi-turbo engine is the lightest and most compact hypercar engine in the world, and produces 1100 hp on E85 bio fuel with peak torque of 1200 Nm spread over over a 3300 rpm rev range. It’s most notable feature though, is a Thule Roof Box which ensures you can take all your gear as well as having a show car with the standard roof when you get there.

Okay, so on regular 95 octane fuel it only has 910 hp which means you can still drive it anywhere, as the power spread with standard juice still offers more than 1000 Nm of torque from 2860 rpm to 6170 rpm – that’s Bugatti Veyron territory. 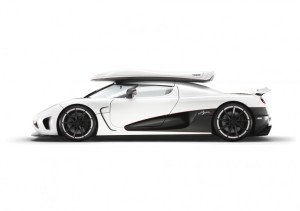 The biggest problem with hypercars though, is that they simply don’t have enough extra room for a toothbrush, and hence Koenigsegg decided that a roof box was in order. Not your normal roof box, but a super light weight Lightning Roof Box from Thule made from carbon fiber tested to ensure it is safe up to 300 km/h.

The ingenious part is that the box incorporates a roof panel and can be easily fitted in 10 minutes while the standard roof is stored in the front luggage area. At destination, simply unbolt the lot and wheel it to your hotel room, while replacing the normal roof.

It’s a feature which no other hypercar offers and it makes the entire package so much more flexible and useful because it enables full luggage capacity comparable to a sedan.

More on the car shortly.