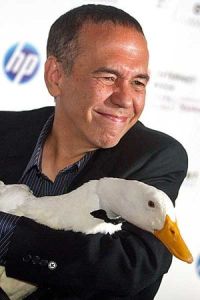 While many celebrities sent prayers and dollars to Japan in the wake of Friday’s deadly earthquake and tsunami and urged their fans to do the same, one responded to the crisis by cracking a couple of ill-advised jokes.

“Wave will hit 8am them crazy white boys gonna try to go surfing,” rapper 50 Cent tweeted Friday morning. That afternoon, 50 (real name: Curtis Jackson) added, “Look this is very serious people I had to evacuate all my hoe’s from LA, Hawaii and Japan. I had to do it. Lol.”

“Wave will hit 8am them crazy white boys gonna try to go surfing,” rapper 50 Cent tweeted Friday morning. That afternoon, 50 (real name: Curtis Jackson) added, “Look this is very serious people I had to evacuate all my hoe’s from LA, Hawaii and Japan. I had to do it. Lol.”

The rapper seemed to come to his senses minutes later, writing, “Nah this is nuts but what can anyone do about it. Let’s pray for anyone who has lost someone.” He then compared the natural disaster to a movie and said that “hate it or love it,” “some of my tweets are ignorant I do it for shock value.”

50 isn’t the only star who sparked controversy with ill-timed tweets. Comic Gilbert Gottfried lost his job as the voice of the Aflac duck after he tweeted, “Japan is really advanced. They don’t go to the beach. The beach comes to them” and “I just split up with my girlfriend, but like the Japanese say, ‘They’ll be another one floating by any minute now.”

The majority of stars took a more compassionate attitude to the crisis over the weekend, ramping up efforts to help victims of the 9.0 earthquake and ensuing tsunami. On his website, pop culture sensation of the moment Charlie Sheen announced that he will donate $1 from each ticket of his upcoming live show, “My Violent Torpedo of Truth/Defeat is Not An Option,” to the Red Cross’ fund for relief. Tickets to his Chicago, Ill. and Detroit, Mich. shows, which range from $35 to $75, reportedly sold out within minutes.

Late Friday, Lady Gaga announced she’s selling a self-designed “We Pray for Japan” wristband on her website; all proceeds from the $5 band will go to Japan relief efforts.

But celebrities haven’t raised the rallying cry that they did after 2010’s Haiti earthquake and 2005’s Hurricane Katrina. As of Monday morning, no plans for a benefit concert, telethon, or similar fundraising event had been reported. When ABCNews.com asked representatives for Sean Penn if the Oscar-winning actor, who quickly latched on to relief efforts in Haiti and New Olreans, planned to do anything for Japan, they responded, “Mr. Penn continues to participate in relief efforts in Haiti.”

So far, the extent of stars’ efforts has been beseeching their Twitter followers to donate to organizations like the Red Cross.

Sheen took a break from his own troubles Friday to tweet his concern for the quake and tsunami victims, writing, “Curveball; Warlock edict; pain & devastation in Japan demands us all to dig deep & LOVE THEM VIOLENTLY Dogspeed my cadres of the Far East! C”

On Friday and through the weekend, stars flooded Twitter with prayers. For A-listers, the news of the quake hit especially close to home — many of them do publicity and perform in Japan.

“My prayers and love is with all of those in Japan. Wow my heart is breaking with every image I see. So sad! Praying hard!” Khloe Kardashian tweeted.

“So devastating to hear about the huge earthquake and tsunami Japan. My thoughts and prayers are with everyone there,” “Glee” star Lea Michele wrote.

Back from a recent tour stop in Japan,Katy Perry wrote, “My prayers go out to anyone that is being effected by the disaster in Japan … #prayforjapan.”

Perry reiterated her message Sunday night: “Imagine… if we ALL texted REDCROSS to 90999 we’d have raised over 60million dollars for #JAPAN REFLIEF! BE THE CHANGE YOU WANT TO SEE! BE!”