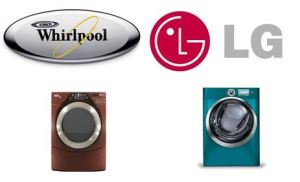 It filed petitions with the U.S. Department of Commerce and the U.S. International Trade Commission seeking an investigation into its rivals’ clothes washers, which are made in South Korea and Mexico.

Whirlpool accused them of “dumping” the products to gain market share, or selling them in the United States at prices lower than the sale price in the country they were made or lower than the cost of production.

It found some success with similar complaints earlier this year, when the Commerce Department said in a preliminary decision that Whirlpool’s foreign competitors had sold certain refrigerators at unfair prices in the United States.

“When foreign manufacturers are permitted to dump products into the United States, it undermines competition,” Whirlpool North America President Marc Bitzer said in a statement.

An LG spokesman said the company is reviewing the petitions and “strongly rejects” any suggestion that it sold clothes washers at dumped prices.

Stubbornly high unemployment in the United States and the weak housing market have diminished demand for big-ticket items like dishwashers and refrigerators.

In October Whirlpool said it would cut 5,000 jobs, or about one-tenth of its global workforce.

The company’s shares fell 8.9 percent earlier this week, when Sears Holdings Corp, one of its top retailers, announced it would close as many as 120 of its Kmart and Sears discount and department stores because of slumping sales.

Last year Whirlpool derived 8 percent of its sales through Sears.

On Friday Whirlpool, which makes its clothes washers at a plant in Clyde, Ohio, said it filed its petitions after conducting an “exhaustive review” and had found “compelling evidence” that Samsung and LG dumped their products in the United States.

According to the complaint, for example, one Samsung model, a 3.7 cubic foot top-loading washer, had a wholesale price in the United States of $363.18, but a slightly smaller Samsung model of 3.6 cubic feet sold wholesale in South Korea for $666.86. The former, Whirlpool estimated, cost $751.46 to make.

Whirlpool filed a similar petition in March about certain refrigerators sold by its foreign competitors.

In October, the Commerce Department issued a preliminary decision on that petition and found the companies had sold bottom-mount refrigerators — those with freezers below the refrigerator — at unfair prices in the United States.

The government then imposed potential duties of up to 37 percent on the refrigerators. The finding forced the foreign manufacturers to post bonds as security for future payment if they didn’t raise wholesale prices to a fair value.

A final decision on an duties is expected in March.

The Commerce Department did not find a Korean subsidy for the products, a complaint Whirpool had also made.

One comment on “Whirlpool accuses Samsung, LG of dumping washers”