• [7:56 a.m. ET] Turkish Airlines said at least seven of its employees were staying at the hotel Friday. Five are free, and two still were in the hotel as of early Friday afternoon, the airline said.

Security forces have reportedly begun a counterassault on a hotel in the capital of the West African nation of Mali, where officials say gunmen took dozens of hostages and killed at least three people Friday morning.

The situation began around 7 a.m. at the Radisson Blu Hotel in Bamako, when two or three attackers stormed the hotel, firing guns and taking a number of hostages, officials said.

By noon, at least 80 hostages had been freed, the country’s state broadcaster, ORTM, reported. The hotel had 140 guests and 30 employees, hotel officials said, though Malian Security Minister Salif Traore said on ORTM that it wasn’t clear how many of the guests were there at the time of the attack.

The attackers, carrying AK-47 rifles, arrived around 7 a.m. in a vehicle or vehicles with diplomatic plates, said Olivier Saldago, a spokesman for the United Nations mission in Mali. Saldago said the hotel was host to a large delegation to peace talks in the country, a former French colony that has been battling Islamist extremists with the help of U.N. and French forces.

The gunmen fired as they entered the hotel, and the gunshots went on for several minutes, said witness Amadou Keita, who works at a nearby cultural center.

Malian soldiers, with help from U.N. troops, had the hotel surrounded, a journalist for ORTM told CNN from the scene.

No group immediately claimed responsibility for the incident. 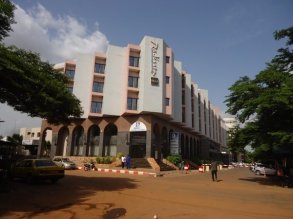 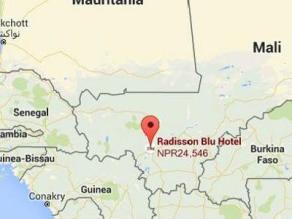 Security forces have begun a counterassault on the hotel, said French President Francois Hollande, who said he’d been in touch with Malian authorities dealing with the hostage situation.

France on Friday afternoon said it dispatched to Mali an elite paramilitary group trained in hostage rescue and counterterrorism operations.

The timing of the attack comes just a day after Hollande praised his troops for successfully fighting Islamists in the landlocked former French colony.

At Mali’s request, France launched an offensive in 2013 after radical Islamists seized the strategic town of Konna.

The ground and air campaign sent Islamist fighters who had seized the northern region fleeing into the vast desert.

There are no French troops stationed in Bamako right now, the French army said.

Twelve Air France crew members who were staying at the hotel are in a “safe place,” the airline tweeted Friday. Air France has canceled all its flights Friday to and from Bamako as a precaution, the airline said.

Turkish Airlines said at least seven of its employees were staying at the hotel Friday. Five are free, and two still were in the hotel as of early Friday afternoon, the airline said.

At least seven Chinese guests are among those held hostage, Chinese media reported.

One of them exchanged instant messages with a reporter from the Xinhua news agency and said he heard multiple gunshots outside his room and then smelled smoke.

China has been expanding its presence in Africa in recent years, investing and building large-scale infrastructure projects throughout the continent.

Many Chinese businesspeople also see opportunities in Africa and have been flocking there.

Twenty Indian nationals also were in the hotel, Vikas Swarup, a spokesman for India’s Ministry of External Affairs, said on Twitter.