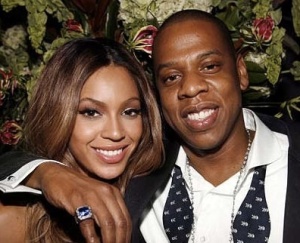 It’s a girl for Beyonce and Jay-Z!

After years of pregnancy rumors and months of due date whisperings, Beyonce has finally given birth to a baby girl. E! Online reports that multiple sources have confirmed that the couple welcomed their first child Saturday night.

As for the name? E! claims new daddy Jay is telling friends it’s Blue Ivy Carter, but other outlets say it’s Ivy Blue Carter. Reps for the couple haven’t given the official word on their bundle of joy, but whatever her name, this little girl already has some famous friends sending their love to her.

According to New York Daily News, the superstar booked the fourth floor of the hospital for $1.3 million to make sure that her baby’s entrance into the world was nothing short of fiercely glamorous.

Speculation that Queen B’s due date was nearing was intensified right before New Year’s Eve, as Beyonce’s mother Tina, sister Solange and her family arrived in New York — no doubt to welcome their newest family member.

It was even reported that Beyonce and Jay-Z welcomed a baby girl named Tiana-May Carterbefore the end of the year, but the rumors were put to rest after a still-pregnant Beyonce was spotted at dinner with Jay-Z on New Year’s Eve in Brooklyn.

Those who were eagerly anticipating the birth of Beyonce’s offspring pegged her due date to late December based on a DVD she released earlier this year, telling fans that she was six months pregnant. “Hello! It’s September 23rd … Right now I’m actually shooting the video for ‘Countdown’ and I’m six months pregnant, pretending that my stomach is flat in body suits,” she said in her “Live at Roseland” DVD, according to the UK’s Daily Mail.

This is the first child for the couple who married in April 2008, uniting two of the biggest names in hip hop. Although B’s baby will not be able to comprehend the magnitude of her parents’ fame for some time, this sure is one lucky tot.

Check out photos from Beyonce’s pregnancy below!