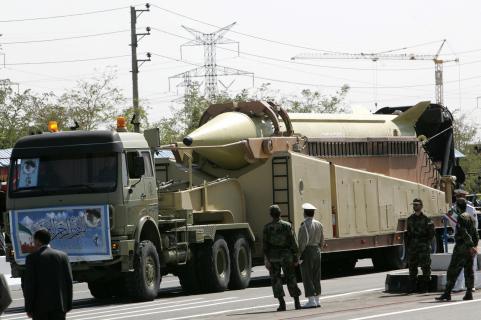 WASHINGTON – The well-organized army of the Islamic State of Iraq and Syria, or ISIS, claims it has access to nuclear weapons and a will to use them to “liberate” Palestine from Israel as part of its “Islamic Spring,” according to a WND source in the region. Franklin Lamb, an international lawyer based in Beirut and Damascus, said the move is part of the ISIS aim of creating a caliphate under strict Islamic law, stretching from the Mediterranean Sea to Iraq Lamb, who has access to ISIS fighters and sympathizers, said ISIS has been working with a “new specialized” unit organized at the beginning of 2013 to focus “exclusively on destroying the Zionist regime occupying Palestine.” Lamb added that the ISIS “Al-Quds Unit” is working to broaden its influence in more than 60 Palestinian camps and gatherings from Gaza, across “Occupied Palestine,” or Israel, to Jordan and from Lebanon up to the north of Syria “seeking to enlist support as it prepares to liberate Palestine.” ISIS is also know as the Islamic State of Iraq and the Sham. “Sham,” or “Greater Syria,” refers to Cyprus, Palestine, Jordan, Iraq, Syria, Lebanon, Israel and southern Turkey. ISIS also is known as DAASH, the Arabic acronym for al-Dawlah al-Islamiyah fi al-Iraq wa-al Sham. The Sunni militant group, which has taken over much of the Sunni region of Iraq, could leave the Shiite-dominated region of the country and head toward Jordan and Turkey.Lamb said that in Iraq alone, some 6 million Iraqi Sunnis recently have become supportive of the ISIS                                                                                                                                                                                                 lightning strikes in the Sunni portion of the country. Some of the Sunni supporters are secular, such as the Naqshbandia Army of former top officials of executed Iraqi leader Saddam Hussein. As WND reported, the Sunni group may have given ISIS access to its ongoing sarin production facility in northwestern Iraq. WND also reported ISIS already has captured towns bordering Iraq and Turkey. The militant group also has steamrolled through the Iraqi desert in the west and taken over the major al-Walid crossing with Syria and the Turaibil crossing into Jordan. Lamb said ISIS has established a capital for its caliphate in the Syrian city of Raqqa. “The Islamist organization believes it currently has massive regional support for its rapidly expanding ‘revolution of the oppressed,’” Lamb said. ISIS estimates it will take 72 months to “liberate” “Occupied Palestine,” or Israel, according to Lamb. Lamb quoted an ISIS member as saying: “Zionists call us masked, sociopathic murderers, but we are much more complicated and representative of those seeking justice than they portray us. “Are we more barbaric than the Zionist terrorists who massacred at Dier Yassin, Shatila, twice at Qana, and committed dozens of other massacres? History will judge us after we free Palestine.” Lamb said ISIS can do what no other Arab, Muslim or Western backers of resistance have been able to accomplish. He quoted the ISIS member as saying: “All countries in this region are playing the sectarian card just as they have long played the Palestinian card, but the difference with ISIS is that we are serious about Palestine and they are not. Tel Aviv will fall as fast as Mosul when the time is right.” The WND source said ISIS appears “eager” to fight Israeli armed forces “in the near future despite expectation that the regime will use nuclear weapons.” “Do you think that we do not have access to nuclear devices?” Lamb quoted the ISIS member as saying. “The Zionists know that we do, and if we ever believe they are about to use theirs, we will not hesitate. After the Zionists are gone, Palestine will have to be decontaminated and rebuilt just like areas where there has been radiation released.” ISIS access to nuclear weapons could come from Sunni Pakistan, which is home to more than 30 terrorist groups. Pakistan possibly has transferred nuclear weapons to the chief bankroller of its nuclear development program, Sunni Saudi Arabia, as WND previously has reported. The Saudis, who also have provided billions of dollars to ISIS, have threatened to acquire nuclear weapons if Iran were to develop its own. The WND source said ISIS denies any interest in training and directing foreign fighters to attack Europe, claiming its goals are to establish the al-Sham caliphate and “liberate Palestine.” The source said the West, and especially the Israelis, may already be aware of ISIS plans and tactics to take over “Palestine.” He said Western intelligence sources were in possession of an “encyclopedia of information” obtained by Iraqi intelligence less than 48 hours before Mosul fell two weeks ago. He said an ISIS messenger who was captured and “under Iraqi torture” turned over more than 160 computer flash sticks with the detailed information. “The U.S. intelligence community is still decrypting and analyzing the flash sticks,” Lamb said. He indicated that the information already has been handed over to members of Congress, some of whom are sharing it with the Israeli Embassy in Washington. “The current sense on Capitol Hill is reported to be that the Obama administration is not in the mood to share anything with Israel these days and certainly not with the Netanyahu regime which it loathes,” he said. Lamb said only time will tell whether or not ISIS reaches both of its objectives. He added that if the “Zionist regime” can be ejected from Palestine, it will set in motion “historic currents” that will be “rather different from the Ehud Olmert-Condoleezza Rice fantasy of ‘a New Middle East.’ “In any event,” Lamb said, “it is unlikely that Iraq, Syria, Yemen, Libya, Lebanon among other countries in this region are going to look much like what George Bush and Dick Cheney and their still active neo-con advisers had in mind when they were beating the drums for a U.S. invasion of Iraq, Libya and now Syria and Iran.”